The Footsteps Centre given a helping hand by Auditel 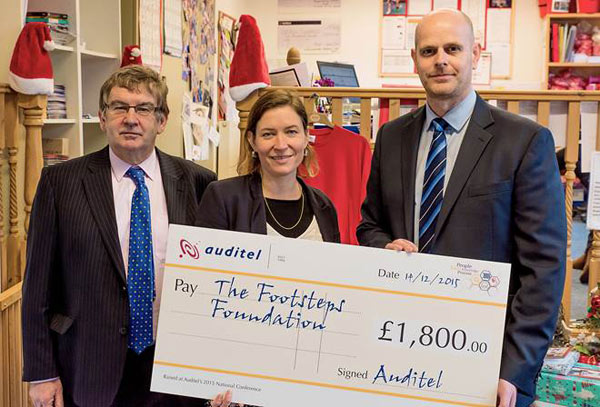 The Footsteps Foundation is based in Dorchester-on-Thames, Oxfordshire. It provides intensive physical therapy for children and young adults with cerebral palsy and other neurological disorders.  This therapy helps improve physical and cognitive development, increases confidence and independence and helps children reach their full potential.  Children from all over the UK attend its Foundation for intensive three-week sessions of 2-3 hours per day.

The Footsteps Centre uses an innovative physical therapy programme that originated in Poland, combining traditional mat work with the use of the ‘Spider’. This piece of equipment enables therapists to align the child’s body using elastic ropes in a frame before carrying out exercises.

The Foundation was set up in 2004 by Pip Hoyer Millar whose daughter Minty has cerebral palsy. Pip was told Minty would never develop beyond the abilities of a four year old and would never walk independently.

After a long search for an intensive physiotherapy programme, they were led to Poland where they found the unique ‘Spider’ apparatus. Having seen how the therapy was dramatically improving Minty’s condition, Pip and two of Minty’s therapists brought the ‘Spider’ to the UK and set up the Footsteps therapy programme.

Starting out with two therapists working from Pip’s outbuilding, Footsteps has now increased fivefold and continues to help hundreds of children with varying conditions and needs. Families with a gross household income of £65,000 or less, including benefits, can apply for grants for the Spider and mat-based therapies.

Pip says: “Our vision is of a future where all children affected by neurological disorders are given the opportunity to reach their maximum potential and are able to develop physically whilst improving their confidence and independence.

Auditel is the UK’s leading provider of Strategic Cost Management. Tim Halfhead is one of their Consultants and has been a trustee of Footsteps since June 2012. Tim proposed the Footsteps foundation for the Auditel nominated charity at last month’s annual National Conference where a raffle was held with the proceeds going to this worthy cause.

Tim was pleased to present a donation of £1,800 to Maggie Davies, Foundation Manager on behalf of Auditel and its network of consultants and suppliers.