The Current State of the Insurance Market

Turbulent times are here in the insurance markets, are you prepared for stormy weather?

Even before the advent of the Coronavirus, two major factors were already impacting upon the global insurance industry, namely, the beginning of a hardening market and the potential results of Brexit.

The market is hardening

After 15 years of a “soft” market, premium rates are on the increase primarily because of reduced capacity, insurers withdrawing from certain market sectors that they now consider to be unattractive and poor global claims experience.

Currently, these developments are particularly noticeable for specific risks such as Directors’ & Officers’ Liability (D&O), Professional Indemnity, Cyber and Construction, with premium increases of anything from 100% to 1000% being seen. This pricing volatility is likely to spread to other areas of the market as it continues to harden.

Reductions in capacity and withdrawal from sectors (for example, food risks) also mean that, increasingly, brokers are unable to place certain risks with a single insurer as has previously been the most common practice. Instead they are having to undertake “split” placements involving two or more insurers.

The impact of Brexit is more of an operational and administrative one for insurers and brokers. From the client’s perspective, specifically, this will affect those with global insurance programmes including countries within the EU area and are likely to entail additional charges for local policy issue where previously the Freedom of Services agreement could be utilised.

Matrix is seeing examples where insurers are removing cover. For example, in the case of some D&O renewals (particularly in the SME sector), cover such as Employment Practices Liability extensions is being removed, or even, in some cases, Corporate Legal Liability cover is being declined.

In addition, increased excesses may also become more common, particularly for companies with US exposures.

The process of purchasing or renewing an insurance programme is very much founded on the broker’s relationship with underwriters. Consequently, the substantial communication issues presented by the current pandemic pose a fundamental challenge for insurers and brokers alike when seeking to transact business.

Many insurance broking personnel and underwriters have no experience of operating in a hardening marketplace and this is exacerbating the problems clients are now facing.

A further factor is that many insurers have established back offices in places such as Eastern Europe and India where facilities for homeworking are not as developed as they are in the UK.

The net result has been a major “slowdown” in the transactional insurance process as the broker and insurer teams have transitioned to remote working. This was very apparent during the recent fiscal year end renewals, which is the busiest period for renewals. Insurers and brokers were hard pressed to finalise renewals with existing clients, let alone carry out alternative market exercises. 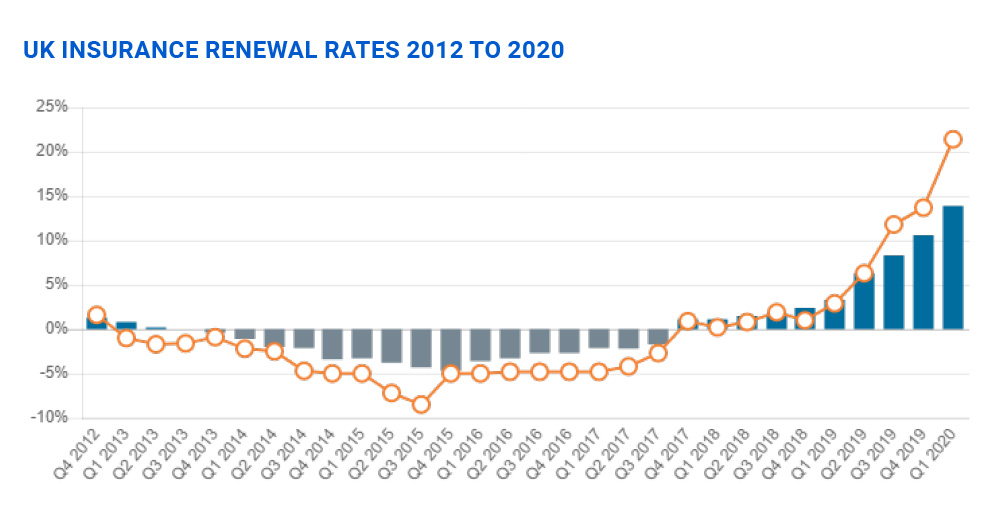