Recent headlines announce that Britain is halfway towards its goal of being carbon neutral by 2050. The analysis of government figures by the website carbonbrief.org shows that 306m tonnes of CO2 were released in the UK last year. Apart from 1926, when emissions fell because of the general strike, it was the lowest amount since 1879 when Disraeli was Prime Minister and Britain was at war with the Zulus. The reduction in car traffic and industrial activity during lockdowns contributed to the fastest fall in emissions for 30 years.

At face value this represents good news – however, a note of caution.

Whilst the UK’s territorial emissions (the narrow definition used in this analysis and by the UN) have reduced by 55% since 1990 levels, emissions related to UK consumption have only decreased by 9%. The reason for this is that in recent times the UK has off-shored around half of its emissions to overseas manufacturing. Furthermore, UK territorial emissions also exclude international aviation and shipping (a situation which the Committee for Climate Change has highlighted must change).

So, whilst the UK can be proud of certain aspects of its home-grown emissions reductions – notably in the decarbonisation of the energy sector – we still have a long way to go and it is critical not to lose sight of the wider picture. Until our international trading partners also succeed in decarbonising the process of manufacturing “stuff” to meet UK demand, we have little hope of delivering the global reductions required.

Where do we go from here?

So how does the Government intend to accelerate progress towards Net Zero? In November 2020 it published its 10-Point Plan setting out what it called the Green Industrial Revolution. This proposes lofty ambitions covering 10 key initiatives to help us achieve Net Zero goals. The question remains – how did this translate to actual environmental measures in the March Budget?

Despite some promising announcements around Green Finance, notably the creation of a Green Gilt, most commentators gave a lukewarm response to Sunak’s budget. What should have been the firing of the starting gun on a decade of decarbonisation was more of a false start in the race to Net Zero. Despite the rhetoric, one of the biggest changes outlined by the Chancellor was the decision not to roll over nearly £1.5 billion of funding for the Government’s flagship Green Homes Grant which was announced just last year by the Prime Minister. This is a tremendous blow to the industry which the Chancellor claimed would generate some 10,000 new skilled jobs. Instead, we heard about some relatively modest investments of £20m for a floating offshore wind competition, a £68m energy storage competition and £4m for a biomass feedstocks programme.

PwC lamented the lack of changes in the tax system, saying “The need for a clear and robust road map to use both public finances and the tax system together to accelerate the changes needed to deliver on the 10-Point Plan is becoming more obvious than ever.” In fact, the Budget outlined a further freeze on environmental taxes – such as the Aggregates Levy and Fuel Duty.

The UK Green Building Council was equally underwhelmed, stating – “In his speech today, the Chancellor insisted that this country needs a real commitment to green growth and to create jobs where people are. However, ‘build back business as usual’ would be a more fitting description for the Government’s plans to build back better.”
The pressures of Government have probably never been more keenly felt as ministers try to simultaneously navigate the country through the Pandemic and Brexit changes. However, with critical COP26 talks heading for Glasgow in November of this year, it is hoped that there will be some further legislative changes made to support their much vaunted Green Industrial Revolution before we get there. 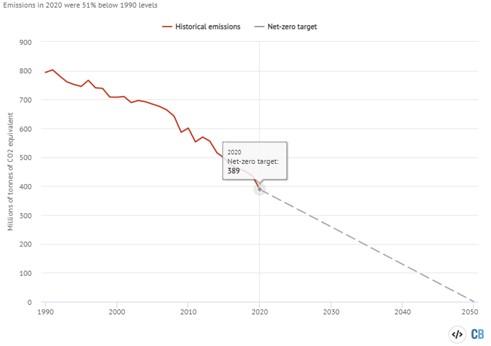