The UK Energy market has continually fallen in value since the highs of September 2018. On the face of it, the trend in energy prices was closely linked to other commodities in the ramp up to September, with gas mirroring oil, coal and carbon with electricity following.

However, it is also arguable that part of the reason for the increase up to September was the pressure being brought to bear on customers with October start dates who had not locked in earlier due to the significant increase in prices relative to the rates they had paid 1 or 2 years earlier.

With both energy and non-energy costs components increasing significantly over the past 2 years it was inevitable that a shock was waiting for them. As soon as the round closed just a few weeks before the end of the month’s prices settled back again.

Subsequently prices have continued to fall and have become less easy to match to oil, coal and carbon prices. Oil which is the main bellwether for gas has rallied since January, but this has not been reflected in the energy prices. 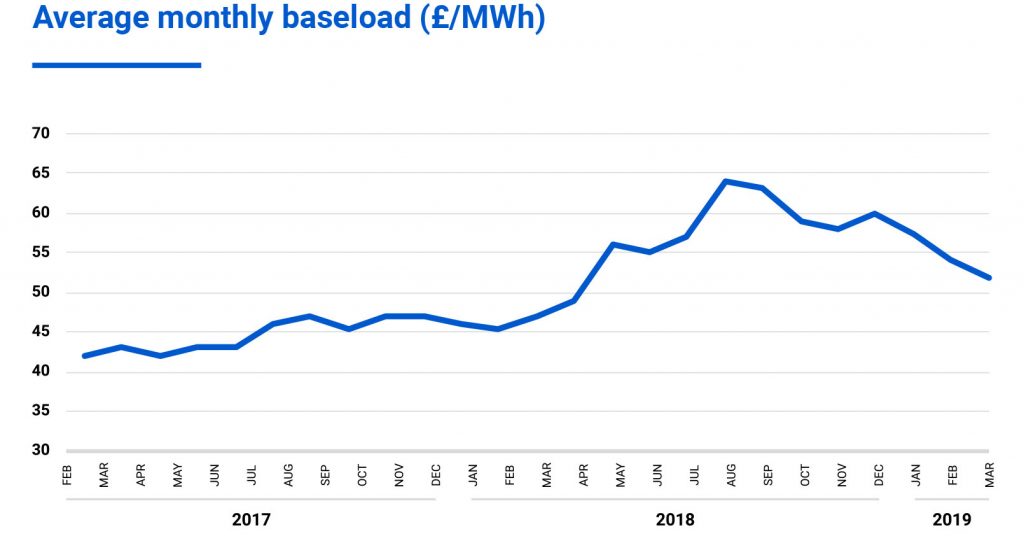 The main factor for this has been the unseasonably mild weather which has kept demand for gas for heating very low. Coupled with this, the slowdown in the Asian economies has resulted in healthy LNG deliveries to the UK. Given that prices for this winter had a ‘fear factor’ built in due to the loss of around 75% of our domestic storage capability and following the ‘Beast from the East’ incident this time last year, there was clearly plenty of fat in the prices.

Looking forward there continues to be confidence that there will be no major weather shocks in the short term as winter draws to a close. Therefore, the big question is the likely impact of Brexit, which will depend in part on whether there is a deal and, if there is, what that deal looks like.

One major inflationary factor to prices could be the impact of Brexit on the pound (£), which if it weakens further will push prices back up. In terms of the technical infrastructure and the trade deals that we have via interconnectors the view seems to be that these will not immediately be impacted, and it will take time for the consequences to be worked out. If tariffs on energy imports become real though this will again push prices up.

Given this uncertainty, volatility is likely but clear trends are harder to spot. Nevertheless, by next winter, with UK gas storage significantly reduced and potential challenges against balancing demand using the interconnectors we might expect prices to rise, particularly if we are not subject to the same benign weather patterns as we have seen this year.

In the longer term, if Brexit has an impact on the economy a demand down turn could be a reality. This would help with prices, though potentially such a down turn may be offset by a growing demand for Electric Vehicle charging and other such electrification projects.

This is an article from: Insight & Innovation: Issue 1 – click here to read the whole newsletter.