There has never been a more’ interesting’ time than now in the energy markets. Fortunately, we seem to be seeing some degree of settling in the market with prices becoming range bound over the past 2 months. However, prices remain volatile within that range of about £180 – £220 per MWh for gas and £190 – £200 per MWh for electricity. Within day movement remains significant by historic standards. 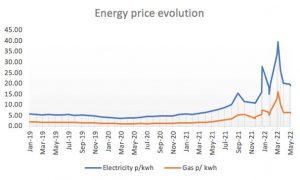 Over the past month, prices initially fell, although more recently they have been creeping up.

Currently, the prevailing drivers are the ongoing threat of sanctions and counter sanctions between the West and Russia. Most recently the decision by Russia to stop supplying Finland and the threat of doing the same with the Netherlands is again adding to concerns about the overall supply of gas to Europe. Perhaps most importantly though, we have seen the premium for LNG increasing in Asia as they come out of lockdown and the summer cooling season gets underway. So, although we continue to see healthy LNG deliveries, increasingly we are beginning to see LNG being diverted to Asia. This is particularly important because although UK storage has been topped up, European storage levels remain behind the level we would expect at this time of year. Short term prices have also become increasingly sensitive to the amount of wind and demand there is in the market.

CONSEQUENCES
As in previous reports, despite the settling in the market, the volatility we are seeing points to a continued sensitivity to geopolitical and supply and demand factors. Of these, it remains more likely that there is going to be worse news than better (i.e there seems little optimism that circumstances could change significantly to drive prices down, whereas the risk of something happening to drive prices up seems greater.) TACTICS Energy prices are proving difficult to come by, with suppliers continuing to avoid risk and restrict their pricing activities coupled with what appears serious resource issues. This will not improve as we hit holiday season and there is historic evidence that as we approach October, (the major tendering period) pent up demand alone can push prices  upwards.

To avoid the risk of being backed into a corner, we continue to encourage customers to go to market for Autumn contracts sooner rather than later.

The increase in the Premium for LNG due to increased Asian demand is unlikely to change in the near future. This provides further impetuous in looking to get Autumn contracts put to bed sooner rather than later.

For example, prices to remain high with a greater risk of prices increasing albeit on a knee jerk reactions basis to market news as compared to serious reductions in prices.

Because prices seem set to remain high for the near and medium future, all businesses should be considering what else they can do to reduce their costs by managing energy usage more effectively and this of course feeds very well into a business’ environmental aspirations. There has probably never been a more prudent time to start to consider energy efficiency, environmental impacts and carbon management than now. To see how Auditel can help with all of these, just contact us.