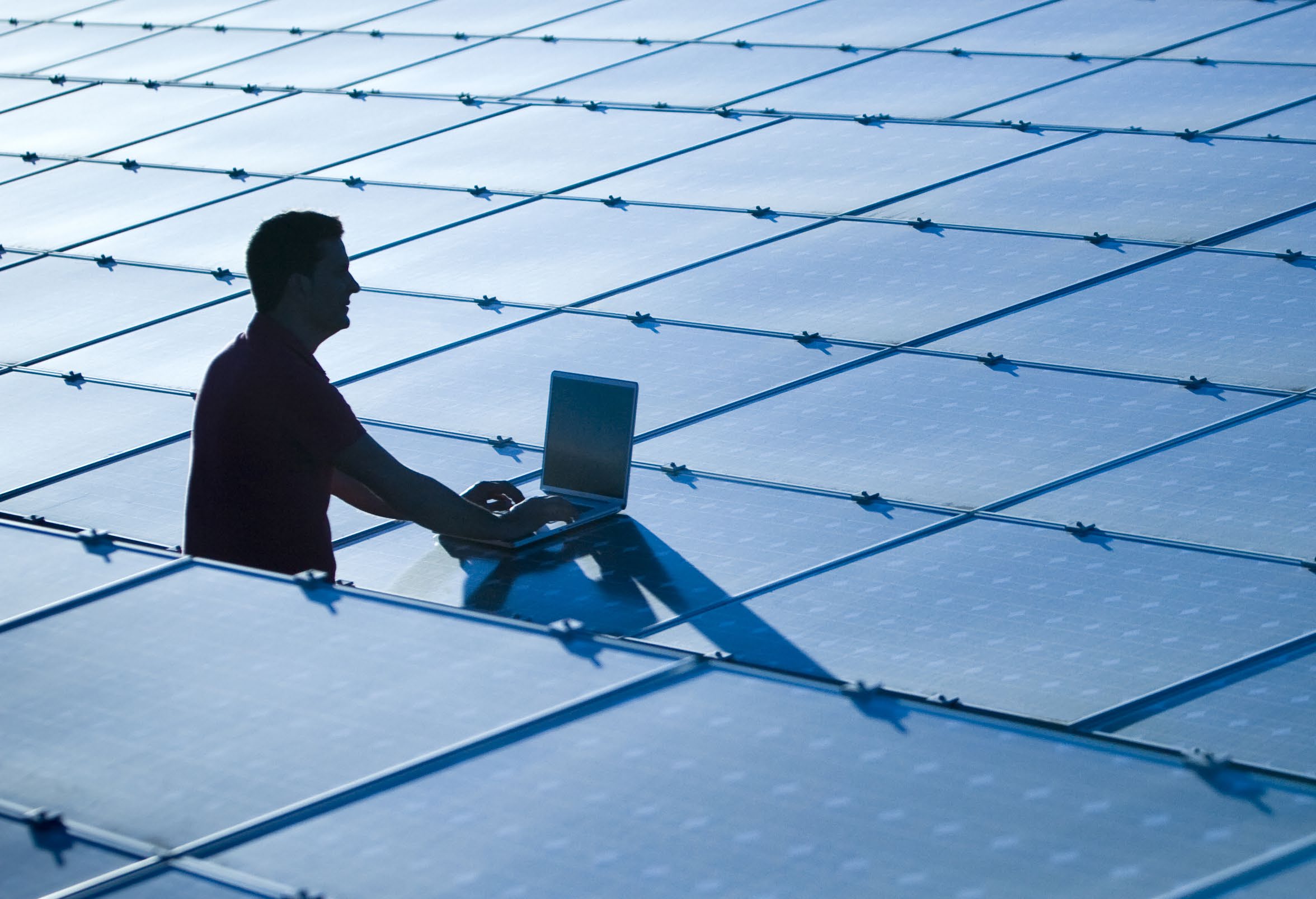 By Chris Aston1st April 2022No Comments

Photovoltaics is the process of converting sunlight directly into electricity using solar cells. Today it is a rapidly growing and increasingly important renewable alternative to conventional fossil fuel electricity generation. The first practical PV devices were demonstrated in the 1950s and the technology was improved by the space programmes of the 1960s and by industry during the oil crisis in  the 1970s. In the 1980s research into silicon solar cells paid off and solar cells increased in efficiency. In 1985 silicon solar cells achieved the milestone of 20% efficiency. Over the next decade, the photovoltaic industry experienced steady growth rates of between 15% and 20%, largely promoted by the off-grid power supply market. Today solar cells are recognised not only as a means for  providing power and increased quality of life to those who do not have grid access, but they are also a means of powering the grid, providing substantial and increasing fractions of grid electricity  with over 100GWp deployed each year globally. PV systems are now often deployed with battery storage so that the system can continue providing electricity even after dark.

GLOBAL  DEPLOYMENT
In its annual renewable energy review for 2021, the International Energy Agency reports that even with surging commodity prices increasing manufacturing costs for solar PV, new capacity additions are forecast to grow by 17% in 2021. This will set a new annual record of almost 160 GW. Solar PV alone accounts for 60% of all renewable capacity additions. In a significant majority  of  countries worldwide, utility-scale solar PV is the least costly option for adding new electricity capacity, especially amid rising natural gas and coal prices. Solar PV generation increased a record 156  TWh (23%) in 2020 to reach 821 TWh. It demonstrated the second-largest absolute generation growth of all renewable technologies in 2020, slightly behind wind and ahead of hydropower. Looming policy deadlines in China, the United States and Viet Nam spurred an unprecedented boom in PV capacity additions – a record 134 GW. Solar PV is becoming the lowest-cost option for  electricity generation in most of the world, which is expected to propel investment in the coming years. However, even this significant level of deployment growth will leave us well short of reaching the Net Zero Emissions by 2050 Scenario. This requires average annual generation growth of 24% between 2020 and 2030, which corresponds to 630 GW of net capacity additions in  2030. The IEA’s analysis provides a stark reminder of the scale of the ongoing challenge: IEA, Solar PV power generation in the Net Zero Scenario, 2000- 2030, IEA, Paris https://www.iea.org/data-and-statistics/charts/solar-pv-power-generation-in-the-net-zero-scenario-2000-2030.

SOLAR PV DEPLOYMENT IN THE UK
UK Solar PV is becoming increasingly commonplace in the landscape of the United Kingdom, with the number of commercial and domestic installations increasing rapidly over the years. The most recent figures published by BEIS demonstrates the rapid pace of deployment: 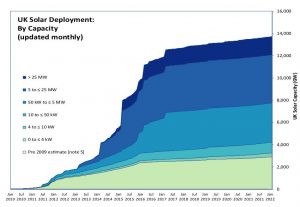 CURRENT UK ENERGY MARKETS
Electricity prices are heavily impacted by rising gas prices because of the importance of gas-fired power stations as the marginal unit to meet demand. This is the most significant driver of the  increase in wholesale electricity prices. Forward electricity prices are also influenced by the cost of carbon allowances, which generators buy in the UK ETS (previously under EU ETS before May  2021). These allowances have also increased significantly in 2021. Carbon prices add to the cost of electricity prices because it is a marginal cost for non-renewable generation which must buy  carbon allowances to offset their carbon  emissions. The impact of the Russia/Ukraine conflict saw prices spike significantly during early 2022. As a result businesses in the UK are keen to find ways of reducing exposure to this highly volatile and rising energy market. https://www.ofgem.gov.uk/energy-data-and-research/dataportal/wholesale-market-indicators

SOLAR PV INVESTMENT DRIVERS
The economics of solar PV in the UK have changed rapidly over the past 5 years. The typical installation cost for systems between 50kWp and 5MWp has dropped from around £2,000/ kWp  during the period of the UK Feed In Tariff subsidy regime to around £650/kWp. The subsidy payable under the FIT scheme was removed altogether in April 2019 and the key benefit of installing  solar PV is now the value of reducing the volume of import energy – the cost of which has risen rapidly in the past six months to March 2022. A properly designed solar PV array can be expected to  deliver payback within 5 years assuming the majority of energy is used to offset the cost of imported electricity. With the uncertainty surrounding the future price of electricity, PV provides a  very useful physical hedge against price increases.

CURRENT INVESTMENT PROSPECTS – 970KWP EXAMPLE
In order to better appreciate the potential for UK business to implement Solar PV on their premises, the outputs from a recent 970kWp array are presented below. This uses fairly typical installed  costs and energy capture, and is modelled as an on balance sheet investment. This drives significant value in the business in question. With a daytime import energy cost of 30p/kWh, the investment saves over £230,000 per annum, and delivers a post tax nominal IRR of 38% The lifetime revenue benefit of such a project is over £13m. 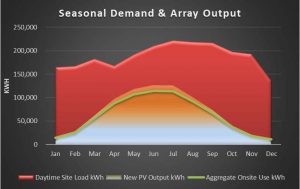 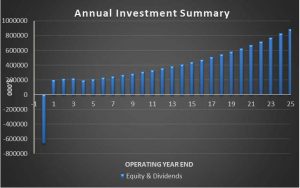 ALSO – CARBON EMISSIONS REDUCTIONS
With business in the UK faced with the challenges of reducing the carbon intensity of operations, solar PV also represents a useful step change reduction in carbon emissions. At today’s grid  factors of 0.21233 kg CO2e per kWh of grid electricity, this 970kWp installation could reduce carbon emissions by around 168te each year. At an typical carbon offset cost of £15 per te, this is a  cost reduction of £2,500 on top of the energy impacts outlined above. So, delivering both significant cost savings and making a meaningful contribution to carbon emissions reduction, Solar PV  is rising to the top of many organisations’ to-do lists.